Some RSPB pictures to colour tonight while we waited for everyone to arrive. Then Beavers made fat balls to feed wild birds around Ballymoney.

They were given some lard in a bag and had to add various tasty bird treats. There were seeds, apples, raisins, oats, meal worms (yum 😂) and cheese.

Lots of squishing and squashing and then rolling of the mixture into balls. They’ll put them in the fridge at home to firm up and then place them in their gardens or around the trim trail for the birds to enjoy. 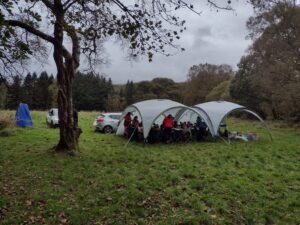 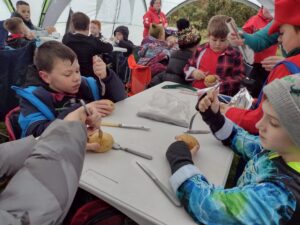 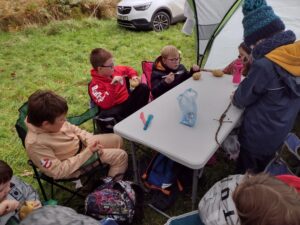 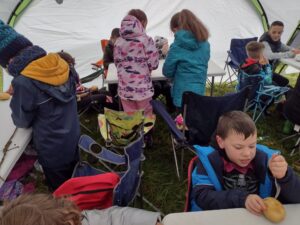 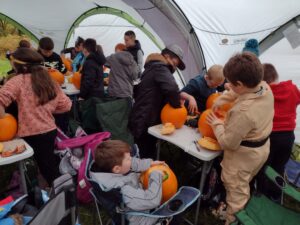 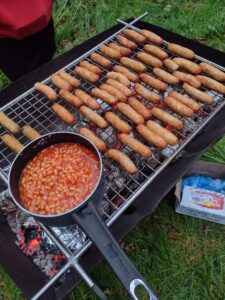 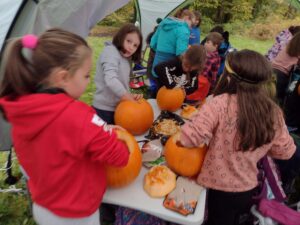 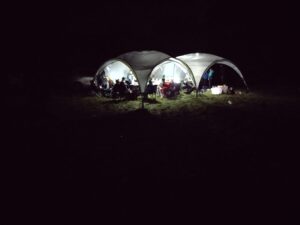 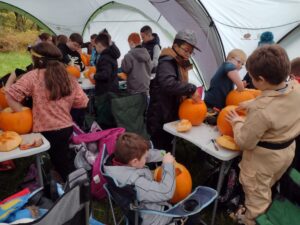 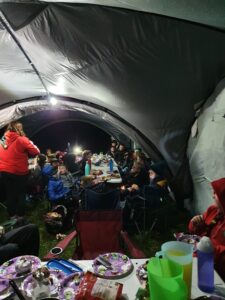 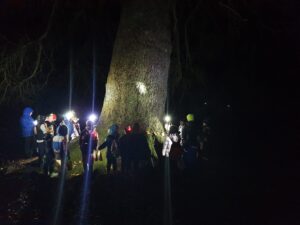 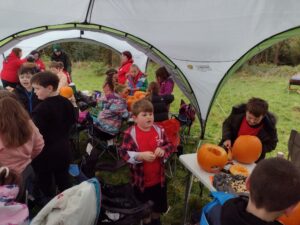 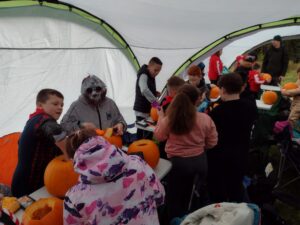 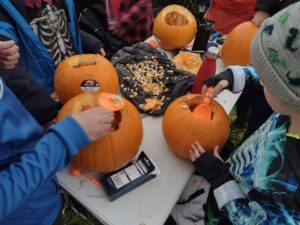 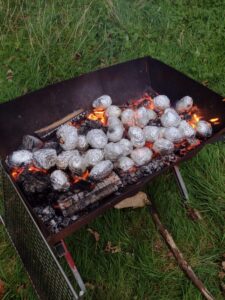 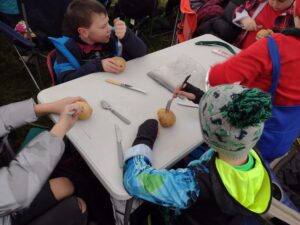 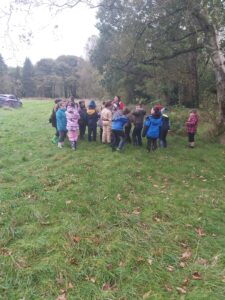 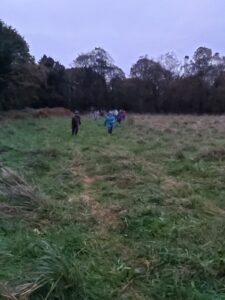 Despite bad weather forcast Cubs cad great fun in our Spooky forest adventure. It all startet with pumpkin searh followed by carving,  some fun games and spooky treasure hunt around dark forest. Good old baked potatoes with beans, cheese and sausages to top it all 😋

On Friday night scouts got dressed in Halloween costumes and completed a 2 mile night time walk around Springwell Forest. Families were invited to join us too. Afterwards everyone was offered s’mores, hot chocolate/tea/coffee and donuts (thanks Joy). It turned out dry after an initial drizzle and we were treated to some lovely starry skies at times. Well done to all that took part, especially the younger siblings.

Wednesday night cubs enjoyed Pack Forum talking through ideas for badge work as well as playing some games to strengththeir teamwork. They also were sorted into their sixies – packs 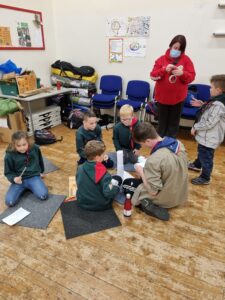 Beavers visited Castleroe Wood for a hike on Saturday. A lovely autumn walk (the rain even stopped and the sun came out!!) collecting leaves, pine cones, seeds and all sorts of natural materials. Half way through the hike we stopped for a creative activity. They each had a small ball of clay which they stuck to trees. Then they moulded the clay into faces and used the materials they collected to create forest faces.

Return walk to the car park where Scout section leader had set up an shelter and ground sheet for beavers to enjoy their picnic lunch. Thanks Shere Khan. A wee game of duck, duck, goose (standing variation) then home time. Well done Beavers, you all earned your hike level 1 👏🏻👏🏻👏🏻

The forest faces were made using all natural materials, including the clay we used. However, scouts do their best to leave no trace. With this in mind the faces will remain for a week or so for walkers and families to enjoy, then leaders will return to remove any clay from the trees.

Tonight, after a game of “bean bag” scouts were assigned patrols. Patrol leaders and assistant Patrol leaders were selected and then they were given 4 challenges.
1. Create an outfit and hat out of paper. Leaders judge best outfit. Some very creative scouts, maybe some fashion designers of the future.

3. Make a paper cup, no cello tape allowed, to hold water for a minute

Patrol points awarded, scouts chose their patrol names (Tiger, panther, wolf and Kingfisher), tuck shop and then a couple of games of dodgeball to finish off.

Everyone started off telling Benny (our Beaver Mascot) what their name was and their favourite meal. Lots of McDonalds!! Don’t worry, camp meals will sort that out 😂😂😂

Some parachute games to see what we have in common and then inside for lodge assignments. Each Beaver was assigned a lodge and they will be challenged throughout the year to complete lodge challenges. They’ll earn points depending on how well they complete the tasks.

We pride ourselves in listening to our young people, whether Beavers, Cubs or Scouts. Tonight Beavers were asked to write their name and a game they would like to lead, which was then put into our youth led box. Every week we will pick a game at random 😄 We also had a 3 dot vote so that Beavers could decide which badge they would like to work towards

Beavers met in the car park for some fun.

First up, we had Benny the Beaver mascot help us introduce each beaver and leader, telling us their name and something they like to do.

We had Beaver friendship bingo, a beavers movement game and the old favourite “foxes and rabbits”

For our last meeting of summer term we invited cubs moving on to scouts to come along for some fun. Team work and communication were very important for the team games. We had team skis, gutter ball and blind obstacle course. We finished up with some hotdogs (cooked by the scouts on trangias) and popcorn.

Scout section met early on Saturday to embark on a trip to Rathlin Island and a 9 mile hike. A drizzly, grey start but the sun eventually made an appearance. On the way to Rathlin we were treated to a fabulous display from a dolphin pod 🐬

After a 4 and a half mile hike, dodging the puffin bus, a herd of sheep and free roaming cows we reached our destination 😁

A quick lunch break and we briefly visited the sea bird sanctuary/upsides down lighthouse after our lunch break. Another 4 and half miles back to the harbour. Well done to Scouts for walking uphills and jogging downhills to catch the Ferry home 👍🏻😂

Back to Ballycastle for some ice cream and playing in the park.

This weekend scouts hiked up Binevenagh, guided by Heather (Pulse Fitness). The hottest day of the year so far didn’t stop our Scouts from completing the route. Lots of refreshment breaks, we hiked almost four miles, some very steep inclines and descents, with uneven ground underfoot. We are very proud of our Scouts achievement today.

Nice wee evening playing a few games in the local park. We had a team obstacle course ( team 2 just beat team 1) and a socially distanced version of ladders. Finally we moved to the play park for a game of the floor is lava. Great to see another (mostly) dry evening for outdoor fun 🤩

This week we wanted to assess our scouts fitness level, so we planned a mini hike. We met at the promenade and walked along the coastal path to Mussenden Demense.

A wee sit down with drinks and snacks, followed up with a game of kick the can in the Demense.

Back to Castlerock along the Mussenden Road. Well done Scouts.

Scouts met on the West Strand, Portrush this week.

A game of beach volleyball to start. Hands sanitised and onto rocket stoves 😃

Each pair were given a pre-drilled piece of fence post. They were provided with a fire lighting kit. Their challenge? To light the stove fully and then boil eggs in tin cans. Pleased to say almost all eggs were edible 👍🏻 Well done Scouts

Wednesday night cubs learned all about Bike Maintenance. We used bike pumps and spanners. After testing their bikes they all had fun ride around car park. We also practiced Grand Howl and invested our new Cub.

This week Beavers went a walk around town practicing their green cross code. We split into 2 groups and started off on our walks. We also had a scavenger hunt as we walked. Finally a game of what time is it Mr Wolf when we returned to the car park.

Last weekend all sections joined groups from the county and beyond, taking part in another virtual camp. This time we had the benefit of being able to meet up for part of the camp too 😃

Beavers met at the hall first, watched the camp opening live, made our camp pictures, played games and completed the straw rocket craft. Eight new beavers were invested and the whole colony made their promise ⚜️ They went home with badges recently earned and resources to make their bee pegs.

Scouts met in the afternoon, took a trip to the local park for some footgolf (set up and ran by YLs), attempted Da Vinci Bridges and then lit campfires and had s’mores (kids brought their own) back at the hall. We also invested 2 new scouts and a leader ⚜️

All sections were busy at home with their families completing a variety of challenges over the weekend. Well done to all Ballymoney Beavers, Cubs, Scouts, YL’s and leaders 👍🏻👍🏻👍🏻👍🏻👍🏻