Lots of fun this week. Bouncy castle, games, snacks and face painting. We said a sad farewell to our Beavers moving up to Cubs. Thanks to Cub leader Bagheera and ACL Kaa for joining us tonight and welcoming the beavers moving to cubs 😃

Lots of badges awarded, Lodge of the year certificates awarded…well done Yellow lodge and watch out for a post for those achieving Chief scout Bronze awards.

Finally we are sad to be saying good bye to Holly (Lisa). She was a fantastic assistant beaver leader and we will miss her so much. Luckily, she is still available now and again to help out if we’re stuck.

Beavers had a pirate themed sleepover in the Peter Thompson Hall, in Castlerock. After signing our Pirate code, Beavers were split into two pirate crews, The Ocean Bandits and The Sea Devils, for a bit of teamwork and friendly competition during the camp.

We had face painting, sword fighting, colouring in competition, a trip to the beach and play park, treasure chest crafts, smores on mini campfires and a pinata filled with booty.

There was a relay riddle solving race in their crews to find out the location of some treasure. They used their skills to follow the map to the treasure, found a message in a bottle which told them to travel Northwest when on the beach (compass required). Another crew challenge was walking the planks races. The final crew challenge was playing captains calling in the park, the winner of which got the point for his crew. At the end of the camp both crews won 2 points. Well done Ocean Bandits and Sea Devils on being equally good pirates 🏴‍☠️

This week beavers made savoury campfire twists, cheese and bacon added for flavour. They worked together measuring and mixing the ingredients in their lodges. Then wrapped the tasty dough around bamboo sticks. Then they cooked them in the yard over the fire. A few fell off but all beavers were given the chance to taste some. 🤤

We were also catching up on their personal challenge badgework. Well done everyone 👏🏻👏🏻

Beavers visited Mountsandel Forest tonight. Following on from the weekends platinum jubilee celebrations, they collected natural materials as they walked to decorate willow crowns. After they finished their creations on Mountsandel fort they had some fun rolling down the grassy hill. Everyone had a wee bun before walking back as newly crowned kings and queens.

On Friday night Scout section invited all sections, family and friends to come along to a street party. They planned the event the previous week and ran games during the event. Lots of families donated baked goods to sell during the evening, there was popcorn for sale, guess the number of sweets in the jar and a jubilee jumble fireside quiz sheet. We managed to raise £230 on the night and a further £20 from a family who were unable to attend. Thanks to all the leaders who helped out, the scouts, our fabulous YLs and PLs, the other sections and family members who supported the event. It was fantastic to see everyone enjoying themselves.

20 Ballymoney Beavers visited Crawfordsburn Scout Centre today. They enjoyed a puppet show, a magician, an adventurous activity (grass sledging), followed some trails, completed a scavenger hunt, met emergency service workers AKA heroes (RNLI, PSNI, Paramedics), crawled and ran around an assault course, toasted marshmallows, enjoyed play areas and bouncy castles. Phew!! Goody bags sent home with crafts to enjoy in their own their own time. We also had a visit to the scout tuck/goody shop. Thanks to NI Beaver team 👏🏻👏🏻

This week Beavers met at the cornfield project, in Coleraine. The Cornfield Project is an amazing regeneration concept that has taken a previously abandoned and unloved area of land and turned it into a thriving nature zone with widespread environmental activity.

They answered some quick quiz questions and then set off to explore the area ticking off their spotter sheets and picking litter as they went.

A rainy Tuesday evening didn’t stop our Beavers from completing their sports badge. Over our past few meetings we’ve had sports day games, netball and badminton tasters, and this week was football skills. Well done Beavers 👏🏻👏🏻👏🏻

Beavers had an Irish night as its St Patrick’s day this Thursday. They had to use their skills to crack the leprechaun’s riddle and complete an Irish I spy. Then we had a visit from our fabulous Scout, Katie, who performed an Irish dance routine and then “tried her best” to teach beavers their 3’s. Well done Katie and thank you 🤩 Finally, a team game….chasing the snakes out of Ireland just like St. Patrick.

If you go down to the woods today, you’re sure of a big surprise…Beavers, Cubs, Scouts and YL’s all met in Somerset Forest. We were unable to meet at the hall this week due to the main hall floor being repaired. So a bit of outdoor fun was in order 😃

A wee walk up to the top of the forest, some refreshments and then time to mix up the sections. Team leaders and scouts helped the younger sections to make shelters. All groups made natural shelters and a few had time to make tarp shelters too. Some great teamwork out in the fresh air.

Beavers were working together with their lodges to complete 4 challenges. Points are awarded to each lodge depending on how well they worked together

The team challenges were…..

Scores were as follows:

This week Beavers had visitor at the hall. William, a paramedic, covered all of the emergency aid stage 1 badge. How to get help, calling 999, putting someone unconscious into the recovery position, using bandages to stop bleeding and some CPR skills. To finish up he answered lots of questions 😅

Beavers did very well and a huge thanks to William for delivering a great session with the perfect level of detail for a young group. At the end of the evening Beavers were given ambulance service keyrings, rulers and their level 1 emergency aid badge.

Beavers learned a bit about Rabbie Burns (Scotland’s national poet) tonight. They found out about a Burns night supper of tatties, neeps and haggis. Rather than having a haggis tasting night we opted for a few Highland games. Tossing the caber (3 pool noodles taped together), Hammer throwing (welly throwing) and tug of war.

We also had a special guest tonight. While Beavers relaxed with Scottish shortbread and a drink, Davy entertained us with his bagpipes.

Here is the link to Davy piping

Lots of curious beavers asking questions. Finally, after awarding a few badges, Davy piped all the beavers out to their parents. Many thanks 😊

Some RSPB pictures to colour tonight while we waited for everyone to arrive. Then Beavers made fat balls to feed wild birds around Ballymoney.

They were given some lard in a bag and had to add various tasty bird treats. There were seeds, apples, raisins, oats, meal worms (yum 😂) and cheese.

Lots of squishing and squashing and then rolling of the mixture into balls. They’ll put them in the fridge at home to firm up and then place them in their gardens or around the trim trail for the birds to enjoy.

This week we were listening to 5 of our Beavers who have been working on their hobby badges. They stood in front of the whole colony and shared their hobby with us. Tonight’s hobbies were drawing, Lego, craft/fishing, Judo and board games. After each Beaver spoke the other beavers had a chance to ask some questions. Well done to all of you 👏🏻👏🏻👏🏻👏🏻👏🏻

We also had a lodge challenge to earn lodge points – crossing the lava field (hall) using their stepping stones (carpet tiles) – and a 5 minute game of football.

Beavers completed 3 experiments in their lodges to gain their badge. They made lava lamps, candle in a glass and oobleck

They learned that a fire needs oxygen to burn and when the oxygen runs out a vacuum pulled water into the glass. Those who lit the candle also ticked off part of their skills badge.

They also learned via our Lava lamps that the Carbon dioxide released from alkaseltzer tablets carried water through the oil and once reaching the surface the CO2 bubble popped meaning the water blob returned to the bottom.

Then they had lots of messy fun with oobleck (a non-Newtonian fluid which acts like a solid when hit, but a liquid when held) 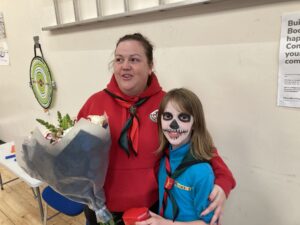 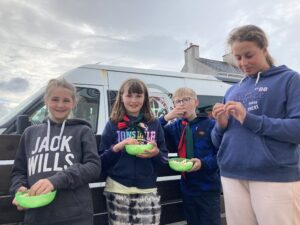 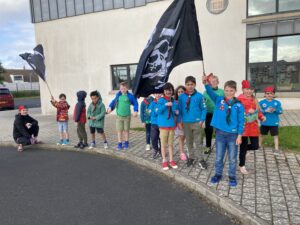 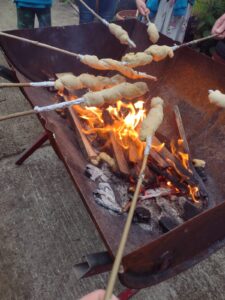 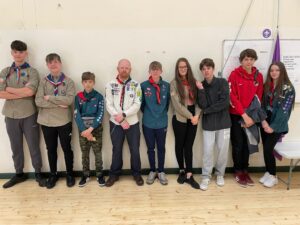 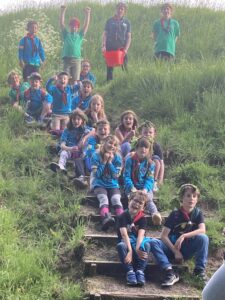 Kings & Queens of the forest 👑 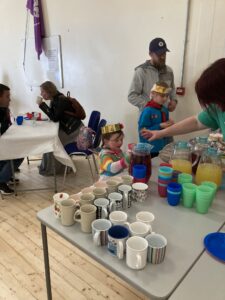 Beavers visited Castleroe Wood for a hike on Saturday. A lovely autumn walk (the rain even stopped and the sun came out!!) collecting leaves, pine cones, seeds and all sorts of natural materials. Half way through the hike we stopped for a creative activity. They each had a small ball of clay which they stuck to trees. Then they moulded the clay into faces and used the materials they collected to create forest faces.